Resapol is the UK’s largest distributor of construction chemicals. The business has seen phenomenal growth over the last 20 years. It now employees 75 staff, operates eight depots across the UK, including two supercentres, and has a turnover of £22m.

The business was founded in December 1999, after its founders, Lloyd Phillips and Sean Ofsarnie, made the brave decision to go it alone.

Lloyd and Sean were part of the sales team at a chemical distributor in Stockport but, when the business went bankrupt, the pair were out of work. They made the brave decision to set up on their own and began looking for suitable premises.

Moss Industrial Estate was recommended to them but, being from south Manchester, they were concerned about setting up so far away from home. However, on their first visit to the estate they were inspired by the other businesses based there and the units that were available.

They were shown around the estate by the owners, Philip and Jonathan Moss, who were impressed by Lloyd and Sean’s determination and their business plan. However, they had nothing and struggled to afford the cost of the unit but Philip and Jonathan trusted them and wanted to support their new venture so they took the time to reach an agreement on a small unit, which would work for both parties. Soon, Lloyd and Sean secured a bank loan of £10k and Resapol was born. 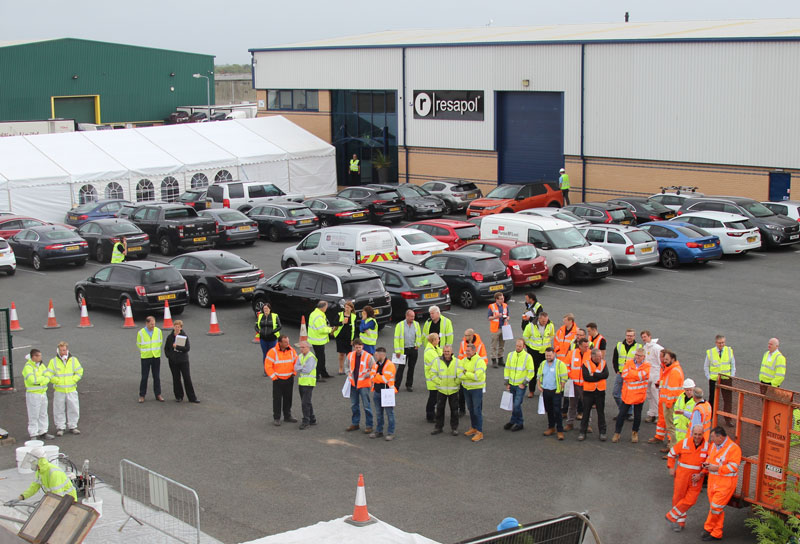 What are the biggest challenges
you have faced?

Getting the business off the ground at the beginning was a significant challenge. Neither of us had ever run a business before so we had to learn as we went: accessing credit, sourcing suppliers and employing people, not to mention finding customers. It was really tough at first but we stayed true to belief that building relationships by being open and honest is the key to success.

In the early days, some industry suppliers wouldn’t touch us but, now, they tell us that they wouldn’t deal with anyone else and that’s all down to building a solid and trusted relationship.

What have been the main benefits of running your business from Moss Industrial Estate?

The nature of our businesses means that location is incredibly important to us and the location of Moss Industrial Estate is amazing. Had we based ourselves in Stockport, we wouldn’t had been able to grow the business as we have.

From Moss Industrial Estate, we are minutes from the M6 and M62 so we have easy access to our customers right across the North West as well as to our other distribution depots across the UK.

There is more to it than location though. The owners of Moss Industrial Estate have always been so supportive and accommodating and have done everything they can to help us grow. We have been fortunate to move units several times over the years as our business has grown and we now occupy one of the largest units on site, at just under 15,000 sq ft.

Forty years on, how is business today and what does the future have in store?

We are proud of how far we have come but we still have ambitious plans for the future. Our aim is to increase our turnover from £20m to £60m in 4/5 years’ time!

In the last year, we have invested heavily in the business, both in technology and in people. We are building a new website and developing an app for our customers, which we hope to launch soon. This will enable our customers to order new stock instantly, directly from a phone or tablet.

It’s important for us to keep growing but also to make sure that we retain the same open and honest approach that has always been so important to building our business.

George Moss & Sons Ltd, the owners of Moss Industrial Estate, has an extensive history dating back to 1920 when the company was incorporated.